Where oh where do I begin? I’ve been wondering if I should let you know what I think of the Samsung Omnia II right off the bat or if I should slowly build my case over the course of this post. Since I can’t make up my mind, I’ll do both. In short, it is a very bad phone. Here’s why.

I remember handling the first Samsung Omnia at a bowling alley a while back. A friend of mine was stuck with Bell, when they didn’t have the iPhone at the time, and she was hoodwinked by a sleazy Bell Store salesman that the Omnia was an iPhone equivalent. I specifically remember trying to open the browser, painfully entering my search, and then seeing an awfully rendered web page. I grew frustrated, laughed, and handed the phone back. I held my tongue but my friend could sense how unimpressed I was!

While the Omnia II ($149, Bell exclusive) is a completely different phone from its predecessor, it still has major flaws and should not be considered by anyone looking for  a functional smartphone.

The root of the Omnia II’s flaws is’t exactly a mystery. The phone is a Windows Phone, running Windows Mobile 6.5. Windows Mobile, for those of you not “in the know,” is the laughingstock of the smartphone world. Microsoft, which had a decade-long head start in the mobile space, has seen its marketshare drop precipitously, to the point where it can no longer be considered competition for the likes of Apple, RIM, and Google. Microsoft’s Windows Mobile is still around only because some manufacturers have been asleep at the switch. Samsung has awoken apparently, and will abandon Windows Mobile for its new bada platform. As well, the company is launching its new Galaxy phone, running Google’s Android operating system.

So why do I hate the Omnia II so much? Nothing worked properly. A fair amount of stuff did eventually work, but not before providing a ton of frustration. I tried to use the “Live TV” app, only to watch the device freeze up. After rebooting and updating, I was watching CTV, CBC New Channel, and even HBO in very respectable quality. It was sweet to be able to watch live NHL hockey games on the phone. 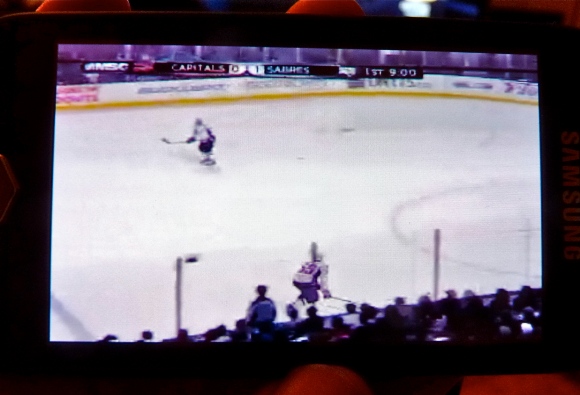 Having TV on the phone was a lot of fun. Waiting ten seconds for the phone to switch from portrait to full-screen landscape was not. More software glitches sometimes make exiting the Live TV app impossible.

I spent my time wishing that the iPhone had live TV, because at least it would work properly.

I don’t know where to begin with the other flaws with this device. When watching a movie and changing the volume, the video is completely covered by a full-screen animation. The phone flickers between screens when you try and move between functions, like a digital hiccup that won’t go away. The included browsers (Opera and Internet Explorer) are awful at rendering web pages and slow. The resistive touchscreen feels completely unresponsive.

It’s also extremely easy to press a wrong button on this phone, primarily because you need to press the screen so hard to compensate for the Omnia II’s lack of responsiveness that you end up squeezing the sides of the phone at the same time.

The most glaring thing about the Omnia II is the cost. At $149, it is grossly overpriced compared to the iPhone 3Gs. Spending $50 more to get an iPhone 3GS is a no-brainer and well worth it. The phone’s main selling point to me – Live TV – is available on other Bell phones like the Nokia N97, which appears to be much more stable.

The Samsung Omnia II is an exercise in frustration, a perfect example of Windows Mobile’s glaring deficiencies, and would be a ripoff even if it were free. I can not recommend this phone to anyone for any reason. Samsung fans should wait for the company’s future Android and bada models.

Host of The Elias Makos Show on CJAD 800.

As for the stability of the phone I must say it is horrible. When installing new apps the phone usually freezes. Even apps purchased directly from Bell through my data plan rarely work without some major frustration.

To be honest the iPhone is a far better phone but the omnia 2 is a very good multimedia playback device with the bonus feature of cellular functionality. If you are looking for a phone that is excellent at playing movies or music and not much else, then omnia 2 may be right for you. If you are looking for a phone with true smartphone capabilities, I suggest you avoid the omnia 2 and spend a few extra bucks on an HTC or an iPhone.

[…] you’ve frequented this blog, then you probably saw my review of the Samsung Omnia II, perhaps the worst phone I’ve ever used and a great example of the failings of Windows Mobile […]