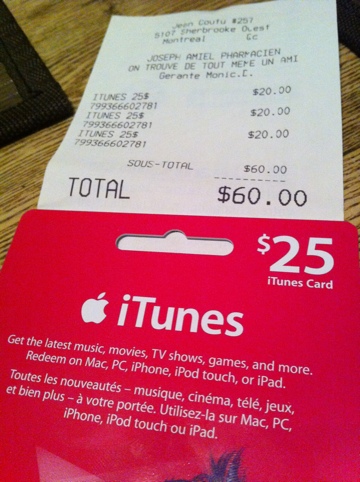 Those of you looking to save 20% on your iTunes and App Store purchases, head on down to Jean-Coutu Pharmacy between now and May 25. $25 cards are just $20, with a three-card purchase limit per visit. $75 of music/books/apps for $60 is as cheap as you will ever find it at Canadian retail.

Earlier this year, Apple finally reversed its long policy of not allowing iTunes gift cards to be used for app purchases, giving some weak excuse about Canadian tax codes. Whenever I pressed them to explain just what Canadian tax laws prohibited this, they could never give me an answer. Lame, I know.

Since the new policy, I’ve always been on the lookout for deals on iTunes gift cards. Thanks to a post from the awesome community at redflagdeals.com, I found one today. Until October 24th, you can get $60 worth of iTunes gift cards for just $48. That’s 20% off, turning your 99-cent apps into 80-cent apps.

Stock up this week. If you don’t have a Costco membership, ask a friend who does to buy you a cheap Costco gift card. The wholesaler allows anyone with a Costco gift card to shop at the store as if they had a membership, and will accept cash, debit or AMEX for your purchases. So even if you only have a $10 gift card, they’ll let you buy a $1,000 HDTV.

I love Android. The Google-created mobile operating system for smartphones is a breath of fresh air when compared to the polished & regulated iPhone and its iOS. Android devices are selling well, particularly in the U.S., where the iPhone is stuck in an awkward monogamous relationship with AT&T. It has become very clear that the iPhone will break free from AT&T’s shackles within the next year, and when that happens, Verizon and T-Mobile customers will also be clamoring for Apple’s handset.

In Canada, where the iPhone is available on the big three major carriers, the iconic Apple device is simply crushing the competition, and Android appears to be an afterthought for most consumers after deciding on an iPhone or a homegrown BlackBerry.

For Android to stave off a multi-carrier American iPhone assault and to become competition for Apple in Canada and other countries, it has to start taking some steps to make Android more mainstream. There’s no reason they can’t do this without changing their exceptional operating system much. Here’s my suggestions to made “Android” as well-known as “iPhone.”

Yes, the iPhone is still the best smartphone overall. Apple has a knack at staying ahead of the competition in hardware and software, but if there’s anyone who can take them on right now, it’s Google. What else should Google do with Android? Let me know by posting a comment.

If you’ve frequented this blog, then you probably saw my review of the Samsung Omnia II, perhaps the worst phone I’ve ever used and a great example of the failings of Windows Mobile 6.5.

Luckily for Samsung, they’ve jumped on the Android bandwagon, a superior mobile OS offering from Google that is serious competition for the iPhone. The Samsung Galaxy S Vibrant (Bell, $149 on a three-year contract) is a perfect marriage of Google’s OS with some very good hardware.

On the other side of this Canadian smartphone battle is the iPhone 4 (Rogers, Fido, Bell, Virgin Mobile, & Telus, $159 for 16GB and 269 for $32GB on a three-year contract). Avoiding the iPhone isn’t easy in Canada, thanks to the fact that it’s available on all of our major carriers, and none of them suck as much as AT&T in the U.S. The iPhone’s penetration in the Canadian market, both carrier and consumer-wise, make it hard to argue against.

Is the Galaxy better than an iPhone? Over two weeks, I tried to find out.

END_OF_DOCUMENT_TOKEN_TO_BE_REPLACED

About a month ago, I was channel surfing, which for me consists of going between CBC, NBC, FOX, CW and PBS – the channels I get in HD over the air from the states, when I stumbled on David Letterman introducing M.I.A. and her performance of “Born Free.” The performance, which you can see embedded below, was perhaps the most outrageous performance I’ve ever seen on network TV. I can distinctly remember saying to myself “What the f*** was that?” when it was over. For those of you who don’t watch Letterman, you’re probably unaware that the show’s musical guests are varied & generally awesome. When I go on YouTube, it’s usually to look at one of two things: Videos of the Montreal Expos, or Late Show with David Letterman musical performances.

So a couple of nights ago, surfing YouTube via the site’s excellent mobile web app, I decided to re-watch that month-old M.I.A. performance, primarily because Letterman’s reaction at the end is priceless. And as I re-watched the video, I heard it in my headphones. Exactly what I was thinking one month ago. At about 4:15 of the video, a man in the audience yells out “WHAT THE F*** WAS THAT?”

If you made it through the entire video without skipping to 4:15, I commend you. Actually, after the third time, the song does grow on you!

For some reason, that video pretty much sums up Summer 2010. I spent it teaching at Concordia, doing the weekly segment on CTV, working on my tennis game and trying to enjoy the great weather. The iPhone 4 has come, and I have bought it. As the summer winds down, the blog will start back up. I’m posting this to get back in the swing of things.

What’s on the agenda for the blog? Well, along with the iPhone 4, I currently have in my possession Canada’s best Android phone, the Samsung Galaxy S Vibrant. Next week, I’ll post a head-to-head battle between the best of the best, iPhone & Android.

I received an email this morning from the people running Nokia’s PR in Montreal about Nokia’s new Ovi App Wizard. Ovi, if you didn’t know, is Nokia’s answer to Apple’s insanely successful App Store. Unfortunately for Nokia, getting developers to make apps for the fragmented mess that is Nokia’s current phone offerings has been unsurprisingly difficult, while competitors like Apple boast upwards 200,000 applications.

The Ovi App Wizard is unfortunately way too little, way too late.

END_OF_DOCUMENT_TOKEN_TO_BE_REPLACED

The Motorola Milestone ($199 on a three-year contract with Telus) is much-needed and welcome competitor in the fight to dethrone the iPhone from its dominant position in Canada’s smartphone wars.

The Milestone is the same phone sold as the Droid south of the border. This naming confusion is symbolic of Motorola’s failure in fighting the iPhone. They are fighting one of the most powerful brands and iconic devices ever, but they make the awful decision to market the Milestone under different names in different markets. It’s a lot harder to build worldwide momentum for your product if you’re trying to sell something called the Droid in the U.S. and the Milestone in Canada and Europe.

Naming issues aside, Motorola has a great product on its hands, mostly thanks to the quickly improving Android OS.

END_OF_DOCUMENT_TOKEN_TO_BE_REPLACED

Google’s new Buzz, its latest foray into the social media sphere has landed on gmail accounts everywhere. Despite launching yesterday at 1pm on a few desktops, Android smartphones (version 2.0 or higher only!) and the iPhone, there seems to be quite a bit of activity by Montreal’s Buzzerati.

My first impressions: Google Buzz, while late to the game, isn’t too late, and I think it will be a hit. While some may feel needing a Gmail account will hamper Buzz, I couldn’t agree more. The fact that so many people already have Gmail means Buzz has an installed user base in the millions. By activating Buzz, Google will automatically suggest Gmail users you know that you can follow. Surprisingly, I found its suggestions to be pertinent and convenient.

The Buzz Web App for iPhone and Android 2.0 phones is impressive, although I have seen some bugginess on Apple’s iconic device when trying to view maps. That aside, being able to localize Buzz is impressive since so many people are using the service already. Doing the same thing with Tweetie on the iPhone can be a big letdown when you see so few people around you tweeting.

I don’t see this as competition for Facebook just yet, but I think the folks at Twitter should be quaking in their Levi’s right about now. Google infrastructure and security is simply too strong to be hampered by the “Fail Whale” and spam that has continued to hurt Twitter.

Where oh where do I begin? I’ve been wondering if I should let you know what I think of the Samsung Omnia II right off the bat or if I should slowly build my case over the course of this post. Since I can’t make up my mind, I’ll do both. In short, it is a very bad phone. Here’s why.

END_OF_DOCUMENT_TOKEN_TO_BE_REPLACED

As I’ve pointed out here and here, Bell has certainly earned its reputation of having Canada’s worst customer service. The company seems to have decided it would be more profitable to deceive drain the life out of its customers rather than make them happy.

So when a friend bought a new iPhone through Bell yesterday, I had to laugh when he told me he had to wait 24 hours for activation. 24 hours came and passed today, and his iPhone is still not fully functional. He was given a temporary number, but told not to use it by customer service. Which kinda sorta defeats the purpose of giving out a temporary number, but I digress. A search on Twitter  just now revealed another new Bell iPhone user with the same problem:

I remember getting my original grey market iPhone in 2007, my iPhone 3G in 208, and my iPhone 3GS this year, all with Rogers, and being activated within 15 minutes. Is this 24 hour+ wait normal for Bell minions customers? Or is a hiccup caused by the switch to Bell’s new HSPA+ network? Come to think of it, when I got my first cell phone, a Qualcomm QCP 2760 with Bell in the late 90s, it took forever to activate it, but it was Christmas day.

If you’ve bought a Bell or Telus iPhone, let me know how it’s going, and if you also had to wait a day for activation.