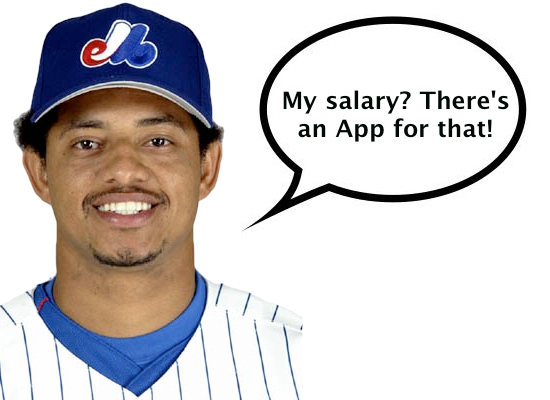 Extremely interesting article over at Ad Age about Major League Baseball’s continued expansion into the mobile space. It’s quite incredible that while the NFL stumbles to show a single game online, MLB’s expansion on the internet and in the mobile space has been (for the most part) well done. Not surprisingly, it’s also turning out to be very lucrative for the league.

Major League Baseball divulged some impressive numbers to Ad Age, chiefly that 400,000 people have paid $9.99 to download the MLB.com At Bat 2009 App for the iPhone. That’s $4 million, or shortstop Orlando Cabrera’s entire 2009 salary.

MLB also announced a new feature for the iPhone App that will be ready for the playoffs: Quad View, which will let fans watch four simultaneous camera angles of the same game.

Of the four “major” pro sports league in North America, baseball certainly had the most problems with television. You can pretty much capture all of the action of a football, hockey, or basketball game pretty easily on a TV screen. With baseball, you can only show a few players at a time, hiding most of the action happening on the field. With the internet, the tables are turned, and baseball’s relentless schedule presents major advantages to capitalize on fans that are always connected. Baseball teams play almost every day from March to September, and then there’s a one-month postseason. A baseball game can easily be followed by glancing at a mobile: Ball, strike, single to right field, pop fly to third base. Try doing hockey play-by-play via text and you’ll realize why baseball’s pace and frequency is made for the twitter age.

Now if baseball would bring the Montreal Expos back, they’d really be on to something. More on MLB’s avant garde mobile branding strategy here.

Host of The Elias Makos Show on CJAD 800.

First of all, GREAT to see Orlando in an Expos uniform again!

I’ve been a baseball fan for as long as I can remember; I also played for 23 years including a stint with Carleton University in Ottawa. With the exception of a few, all of my friends laugh at my passion for the game. If I had a nickel for every time I had the “But it’s so slow, and boring…” conversation with someone, well, let’s just say I’d have bought and kept the Expos in Montreal.

I couldn’t agree with you more regarding the perfect marriage between MLB and the mobile age. Although I’ve never had a problem sitting through an entire game, I have found watching the condensed games, the four-way screens and keeping tabs on a game using ‘Gameday’ and the audio feeds to be absolutely fantastic.

While the MLB has it’s shortcomings [just a personal opinion but I think getting rid of Selig might help rectify a few things] I think they’ve hit a homerun with all of their online efforts, mobile or otherwise.

Thanks to you Les Expos continue to live.